In September 1928, while preparing to travel, Dr Grigoriy Ivanovich Rossolimo died. Soon after death, the brain was removed from the corpse and preserved for transportation to the new Moscow Brain Research Institute, where it would be carved into thirty thousand slices as thin as paper.  According to the records of the Institute, it weighed precisely 1,543 grams. 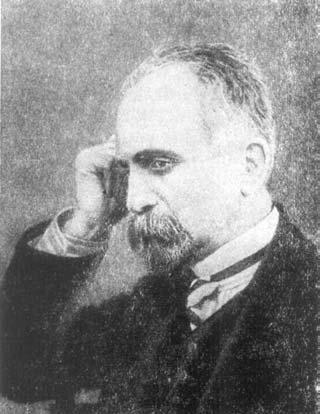 Rossolimo’s brain was not the first to be dissected in this manner. The Moscow Brain Research Institute had grown out of the efforts of a group of Russian and German neurologists to study one brain in particular: that of Vladimir Ilyich Lenin. In 1922, when Lenin was beginning to suffer the effects of his final illness, Rossolimo, one of the Soviet Union’s foremost neurological specialists, had been among the consulting physicians summoned to his bedside. After Lenin died, the commission entrusted with the preservation of his immortal memory decided that the brain should be examined with all the resources available to modern medicine — ‘to throw light’, as a later commentator in the Anglo-Soviet Journal would put it, ‘on the structural basis of Lenin’s genius.’

That the brain, properly examined, might reveal the secrets of the mind was a hypothesis of the latest European neuroscience, but it is not hard to see why it should have been embraced so eagerly by those who claimed to be working towards a new society on Marxist principles. With the right techniques, the material conditions of Lenin’s personality and intellect might yield themselves up to analysis. (Medical careers in the early days of Soviet Russia had been made and ruined over less fanciful interpretations of historical materialism.) So the anatomists fell to their work, while at the same time the Institute began collecting comparable brains for a ‘pantheon’ of Russian heroes. 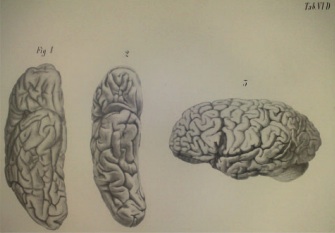 But there were other factors to consider. During his final illness, Lenin had dictated a testament which was harshly critical of Stalin, who since taking power as General Secretary had begun consolidating it in his own person. If Lenin’s brain could be shown to be physiologically exceptional, and yet diseased, it could be used to fortify his reputation while discrediting his testament; if, on the other hand, it showed no sign of disease, his allies and widow could argue that the denunciation of Stalin had been made while Lenin was of sound mind. But the initial results were inconclusive; and as the years went by it became clear that power in the Soviet Union did not rest on the condition of the brain of its former leader. By 1936, when research on the brain ceased, the institute had added to its pantheon the cerebella of tens of distinguished Russians and foreign communists. Among them, as well as Rossolimo’s, were the brain of the novelist Maxim Gorky, those of the poets Mayakovsky and Bely, and that of the French communist writer Henri Barbusse.

The measurement of the furrows of the frontal lobes and the furrows of the other lobes yielded the highest percentual value for V. I. Lenin’s brain in comparison with other brains investigated along these lines… The temporal lobes also exhibit a large number of furrows.†

Rossolimo’s was a celebrated brain: its owner had been one of Moscow’s élite since before the revolution. He was born in Odessa in 1860, the grandchild of a shipwrecked Greek sailor who had made his home in Russia. At nineteen he entered the Moscow Medical School, where he earned his doctorate in 1888. After his training, he established a neurological clinic at Ekaterinburg, concentrating his research on the physiology of the brain and nervous system, and in particular the effects of neurological damage on muscle reflexes. Later still, he took an interest in childhood diseases, and began to study child development and behaviour.

So successful was Rossolimo in his field that by the early 1900s he was able to buy land in Lutsino, the picturesque country village to the west of Moscow where a number of other scientists and medical men had their summer retreats. In Molotov’s Magic Lantern, her haunting book about encounters with Russian landscape and history, Rachel Polonsky visits Lutsino and notes that Rossolimo’s estate ‘occupied the highest position above the river … Russia’s greatest writers, painters and musicians were among Rossolimo’s close friends; Tolstoy, Maxim Gorky, Konstantin Balmont, Tchaikovsky and the painter Valentin Serov were guests at his home.’ In 1924 he made an appearance in fiction himself: while fielding a barrage of media attention, the zoologist in Mikhail Bulgakov’s satire The Fatal Eggs advises one nuisance caller to go and get her head examined ‘by Professor Rossolimo…’

Following his research on child development in the early 1910s, Rossolimo published the results in a German journal, Klinik für psychische und nervose Krankheiten — Studies in the Medicine of Psychological and Nervous Illnesses. He wrote that he had developed a kind of scale that could depict a person’s psychological structure with reference to a constellation of measurable responses to a barrage of tests. These tests were diverse, ranging from the identification of objects from pictures and the construction of simple forms out of metal pieces to complex mind-games designed to evaluate the suggestibility and attention span of the test subjects. (‘Say you’re going to speak ten names: speak only nine, but count ten on your fingers.’) By graphing these responses on a scale in which the scores ran along the x-axis and the qualities measured ran down the y-axis, he produced a visual representation of an abstract set of personality characteristics. He called the resulting set of data a Profile.

In the graph reproduced below, A is the average profile of a group of test subjects classified by Rossolimo as mentally unstable, while B is the average profile of a ‘normal’ group. Perhaps it is merely a coincidence that the profiles produced by Rossolimo’s method suggest the jagged outline of human faces — one agape, the other serene — looking to the right of the image. It remains unclear whether Rossolimo chose to use the term for that reason, though it was an unusual word to find in a German publication. But this seems to be the first time the word ‘profile’ had been used to refer to such a representation of personal data offering a visual outline of an abstract set of psychological results, calibrated to distinguish between normality and deviance. 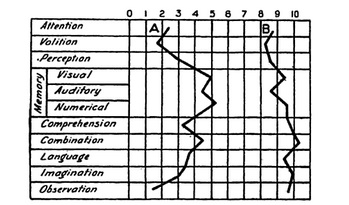 When in 1916 an American sociologist, Dr Beryl Parker, published an account of Rossolimo’s technique in the American Journal of Psychiatry, she called it ‘The Rossolimo Psychograph’. But by that time the ‘Rossolimo Profile Method’ had already been adopted by criminologists, among them William J. Hickson, the director of the Psychopathic Laboratory in the Chicago judicial system, who in a 1914 essay entitled ‘The Defective Delinquent’ reported having used it, along with other metrics, in the examination of a sample of 245 young offenders between the ages of seventeen and twenty-one. Hickson’s results led him to a conclusion that was unusual. ‘These cases,’ he wrote, ‘deserve to be better understood, and deserve our pity rather than our present attitude of indifference. … We must assume in all of this work the inter‑relation of brain and mind; that all of our thinking and doing are brain processes.’ Criminality, Hickson argued, might not in all cases be a matter of moral failing, but might quite frequently be the result of physical defect.

In V.I. Lenin’s brain, we found very large cells, especially in the III layer, in the frontal region, notably in areas 10 and 46, in the lower parietal region, in the upper temporal region, in the temporal‑parietal‑occipital region adjacent to area 19, and in the postcentral region.

In 1899, Rossolimo had sent a letter to the writer Anton Chekhov, with whom he had been at medical school twenty years earlier. Rossolimo had become involved in the collection of material for a memorial album commemorating university days, and hoped that Chekhov could supply some information about himself. In return, Chekhov sent a photograph — ‘a pretty poor one’ — by registered post. He suffered, he wrote, from a disease called autobiographobia. ‘It is real torture for me to read any details whatsoever about myself, to say nothing of writing them up for the press. I am enclosing several dates entirely unadorned on a separate sheet of paper. That’s the best I can do.’

How did Chekhov’s response strike Rossolimo, who in the next ten years would expend such effort in trying to record the quantifiable details of personalities and to represent them in ink, on charts, away from the welter of confusions and contradictions and aches and fears that make up the whole person? It is impossible to know. Likewise impossible to know whether Rossolimo, a keen theatre-goer, had been in the audience two years earlier for the disastrous premiere of Chekhov’s Ivanov at Korsh’s theatre in Moscow. The actors were under-rehearsed; some of them had been drinking. Even so, if he was by some chance there, and if the actor playing Ivanov remembered the lines, Rossolimo would have heard the speech, shortly before the climax of the play, in which Ivanov rebukes the moralizing Dr Lvov. In each of us, Ivanov tells the doctor, ‘there are too many springs, too many wheels and cogs for us to judge each other by first impressions or by two or three external indications. I cannot understand you, you cannot understand me, and neither of us can understand himself. A man may be a splendid doctor, and at the same time a very bad judge of human nature; you will admit that, unless you are too self-confident.’

Of the two versions of Grigoriy Rossolimo’s last days which are to be found in the specialist literature, one says that he suffered a debilitating stroke on 18 August 1928 after a particularly strenuous day of physical activity, the other that the stroke occurred in September. One notes that Rossolimo’s speech was affected and that he had difficulty in expressing himself; the other states that following the stroke he spoke excessively. These accounts, both by the same author, are separated by three years.

Both, however, agree that over the following weeks Rossolimo began to recover, and that he made arrangements to travel to Moscow for further medical evaluation. As he was preparing to leave, he suffered a further stroke, or perhaps a heart attack. Here again the record is not clear, though it seems likely that Rossolimo died soon after this second convulsion. More facts are not readily available, which leaves little besides narrative and impression. Yet I find that in my own mind I cannot call up any image whatsoever of the moment. It has been useless to look in imagination for any details about the position of the body, whether it fell or was seated, whether Rossolimo was alone. And it has been vain, too, asking what passed across the consciousness of the man as the body failed. Strange to say, what comes to mind, displacing any other idea of the scene, is only the thought of the travelling cases standing in the hall, and, lying on a low table nearby, the thin sheaf of papers prepared by the doctors. 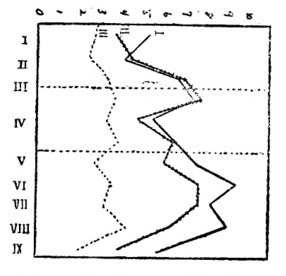