Preparation
The postures, gestures and facial expressions that are most often associated with the act of yawning are not generally considered to be particularly flattering.

(A stifled yawn as breath sous-vide)

Granted, the lines of a face that might privately once have been considered attractive in some small, world-weary, care-worn way can become emphasised to great effect during the execution of a yawn; overall, however, the revitalisation of one’s respiratory tissue through the process of yawning does not regularly present a yawner at their best. If you seem or a friend/relation/lover/neighbour seems more attractive while yawning, you/they are profoundly beautiful.

I cannot quite imagine a horse yawning. This is a failure on my part. During trials in the development of the anti-depressant Clomipramine (trademarked as Anafranil and Clofranil), test patients of both sexes reported that continued use of the medication in pill form caused inadvertent orgasms when yawning. These last two statements are not related. My mind is wandering.

Too-quick chicanery of thought can cause a conversational form of the bends.

Every time I yawn there is a grinding click on the left-hand side of my face. When I was a lot younger, I attempted to tackle a type of a sweet called a ‘gob-stopper’. It may well still be called a ‘gob-stopper’. I feel about 300 years old wondering whether the word is spelt ‘gobstopper’ or ‘gob-stopper’. I also feel uneasy about the inverted commas. Pedantry can help loop the loose electricity of a yawn across one’s tongue. At the time of the ‘gob-stopper’ I was on a school language-exchange programme, stationed at a German town called Boppard. ‘Boppard: the Pearl of the Rhine,’ read the English-language pamphlets on the tourist information desk. I can recommend Boppard’s a) riverside views, b) riverside benches’ paintwork that yielded so easily to new initials in nail-scratched hearts and c) vending machines, at one time filled with gobstoppers and/or gob-stoppers. Zauberkugel (n.): harte, runde Süβigkeit. Eine geballert kriegen. Wir bummeln ohne Ziel durch die Stadt. ‘Gob-stoppers’ have probably been discontinued on various health and safety grounds; I really do want to emphasise that this was a candy to be tackled rather than enjoyed. I remember thinking that its English name, Beano and Bash Street Kids-y, seemed so at odds with the thing so smooth and glossy in the Pick’n’Mix dispenser. Its surface was curdled like Jupiter and it sat as heavy and as flawless as Murano glass in my hand.

That may have been the sweet’s attraction at the time: the discrepancy between its name and what I thought was its obvious value. It was not a sweet to share.

(Yawning can look like snarling if one is caught at the right moment. The first person I kissed lived in Boppard, and they yawned directly afterwards. I doubt they remember this.)

Other people’s nostalgia can help loose the taut crows-footwork of a yawn across one’s eyelids. Horses yawn when they have liver disease, dogs yawn when they are frightened, fish yawn when they are drowning in air. Do not play this game if you suspect you fall into any of these categories. If you are unsure, it is always best to consult a medical practitioner.

What better time for a game than when you are feeling fatigued? Try yawning now. Look at the word: yawn. Y-A-W-N.

A lumber of a word. A lummox. Let your mouth and eyelids do the work.

Note 1: Surroundings
Should the game be played in a place where more than one other person is present, a yawn-rally between the inter-yawners can be followed by attempts to recruit other opponents. Wittingness and willingness is left to the player’s discretion.

Note 2: Scoring an Ace
Skilled players of the game can make more than one person yawn with a single volley. This move gains THREE POINTS so long as it is quite clear who has incited/instigated/procured the subject’s/s’ yawns).

Note 3: Style
Intermediate players of the game might find that signature moves can be accomplished with greater confidence (and verve!) when supplemented by pandiculation; that is, stretching. I believe that in German ‘pandiculation’ is best expressed by the word Streckung. Lazy research informs me that this word has a pleasing idiomatic correspondence with eine Vergrößerungs- oder Verkleinerungsabbildung in der Mathematik (‘an enlargement or reduction figure in mathematics’), a fact that will perhaps help players who are now considering their best plans of attack during a round of ‘Positive Feedback’.

I am currently playing a round with an unsuspecting window-cleaner dangling outside my third-floor office. Every time he pulls a vector of suds across the glass panel and squeegees it aside, I yawn. He has not returned the volley thus far. It is a waiting game.

Many baroque and burlesque players of the game aver that noises can assist the contagiousness of their yawn-delivery. I have always found a silent yawn is a powerful gambit. Sighs are on the whole unnecessary but can prove tactically astute.

Suggested Training
‘Positive Feedback’ can be played outside, inside, sitting down, standing up, on your commute, on a crucial anxious first trip abroad, alongside pre-prepared combatants or with unaware bystanders. 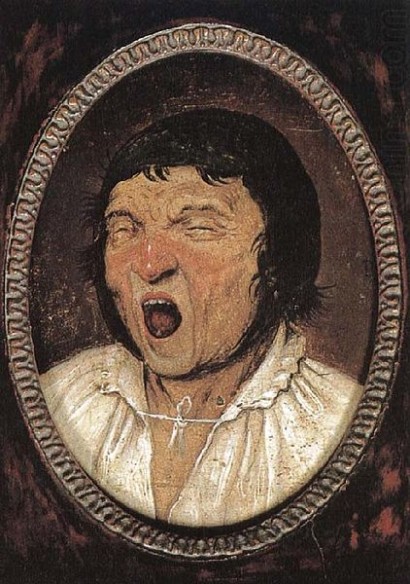 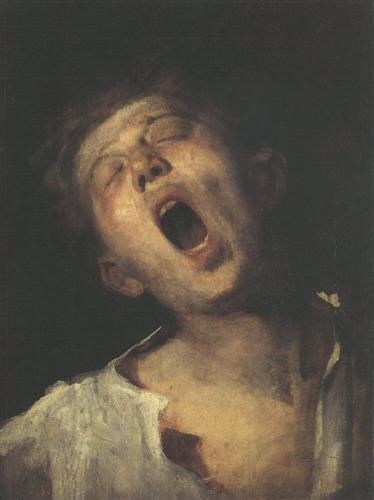 Should you wish to practise at home, please find above some useful figures from art and history. Players of the game might like to cut them out and, limbering, at their leisure, give them a glance.

The gobstopper tasted of absolutely nothing. There was a mishap, and now my jaw clicks whenever I yawn.

Bees and the Keeper

keep, v. To take care of, look to the well-being of; to look after, watch over, tend, have charge of. It was then, in spring’s first balmy days, just as crocus, blackthorn and hazel flowers emerge… Read article