At Yaroslavl, looking east on a bend in the frozen Volga, river, land, and sky merge into a white vagueness in the middle distance. The Volga seems like a boundary at the end of the earth, but somewhere out there are more of the world’s longest rivers, frozen veins connecting eight time zones of immense Russia. It is the middle of maslenitsa, a week-long festival to mark the arrival of spring, but here, looking ahead, a thaw is hard to imagine. Last week it was -35°C.

At the historical museum there is a crudely executed mural depicting a 13th century Tatar-Mongol attack on Yaroslavl, once an important regional capital before Moscow rose to prominence. A Mongol warrior is about to kill a stricken Slav in the snow while wooden buildings burn in the background. I chuckle at the invader’s cartoonishly sadistic grin and am reprimanded by the babooshka in attendance. I should not laugh, she says: this was a serious time in the history of Russia.

The streets are snowbound and deserted. Today is Army Day, a national holiday, and everyone is inside, drinking. For lunch we go to a restaurant themed around Ivan Vasilyivich Changes His Profession, a popular time-travel film from the 1970s in which Ivan the Terrible gets transported to Brezhnev-era Soviet life with hilarious consequences. After several shots of local firewater I pose for photos in a replica of the tyrant’s costume.

Four days later and three hundred kilometres further south, great shards are shearing off the river ice in the Moskva and beginning to float slowly downstream. It’s the last day of maslenitsa, and we are heading to Gorky Park to watch the straw doll burn at one of the state-sponsored celebrations. Maslenitsa was banned in Soviet times due to its Orthodox significance as the week before Great Lent, but its origins are pagan. They survive in the tradition of erecting brightly dressed straw dolls based on Kostroma, an East Slavic fertility goddess, and burning them today, on the last day of the week. People ask for each other’s forgiveness for wrongs they have done. The wrongs are consumed in the fire and the spring begins.

We follow the Moskva down to Gorky Park in the waning light. It’s dark by the time we get there. Ahead of us, instead of the straw doll, is a ridiculous two-headed bird, glowing from the fire in its bloated belly and shooting intermittent salvos of flame from nozzles in its wingtips. A week before the election, the authorities have seized this chance to appropriate a public occasion with their own agenda. Cremating the old symbol of Imperial Russia might have suited this park in Communist times, but these days Tsarism is back in vogue. The bird’s made of metal, and it won’t burn.

Later we escape the savage cold and descend into a smoke-filled cellar bar where a topless, red-faced, middle-aged man in camouflage trousers is bellowing above an industrial metal backing track to a small audience of arty types seated at tables. “I thought I was in heaven, but actually I’m in hell. Get me out of this frying pan! Get me out!” he screams, smashing the mic repeatedly into his own forehead.

I haven’t had a drink all evening, but now there is vodka on the table in a bulbous glass phial. The session is swift and brutal. I am told I must eat between shots – cured herring, potatoes, black bread, vegetables recently extracted from embalming fluid. “To the four great rivers of Russia! To the Ob, the Lena, the Yenisey, and the Volga!” There is a shot for each. “To good company! … To the Olympic Games!”

On election day the centre of Moscow is in lockdown, with thousands of uniformed servicemen sitting bored in personnel carriers or standing in side streets and underpasses in rank and file awaiting orders. To get to Red Square I cut through GUM, an enormous nineteenth century shopping arcade, where designer jewellery and clothing outlets are doing steady business. I pass a sign pointing out a Historic Toilet and some shoppers gawping at a gleaming sports car that’s first prize in a competition. On leaving the building I discover that the authorities have closed off Red Square, except for a raised ice rink on which teenagers are whizzing around to an Abba megamix. My guidebook tells me this is the place where Ivan the Terrible erected a human-sized frying pan for a festival of torture in 1570, promising safety and pardon to anyone that came to watch.

I pass hundreds of Muscovites queuing at a polling station. There are rumours of an opposition protest at Lubyanka Square, between the KGB headquarters and Russia’s largest toy shop, but when I arrive there it’s empty apart from a team of Tajiks in orange overalls shovelling snow. I meet my friends in Modest Charm of the Bourgeoisie, a nearby cafe. There’s a well-known opposition blogger at the next table who hasn’t heard anything about a protest. We hole up there for a few hours, oblivious to Putin crying about a mile away. When we leave, his supporters are shuffling through the backstreets to their waiting buses. I identify a Cossack from his pointy hat.

The following evening, the digital thermometer above the Rolex hoarding in Pushkinskaya displays a reasonable zero. The square is full, but the protest muted. Flags attest to the crowd’s disparate nature  – communists, anarchists, Prokhorov supporters, someone with a Yukos banner. On the stage, opposition poster boy Alexei Navalny tries to start a chant of “We have the power” but only a few join in. Two guys near me are building an igloo, shuttling methodically back and forth with compacted snow that they’ve carved into blocks. They must think the winter’s here to stay.

The last speaker finishes and thousands stream through the exits and down into the metro, jovial music blaring from the tannoy. It feels like the end of a village fête, and a disappointing one at that. Later I find the Western news sites are plastered with close-ups of Navalny getting himself arrested accompanied by breathless reports of a revolutionary atmosphere and an opposition movement gathering force.

The following Saturday is a beautiful day for a protest, but I arrive on Novy Arbat for what should be the climactic speeches to find they’ve ended early. There are choppers in the sky, news teams, militiamen standing around smoking in the sunshine, but the few protestors that were here have mostly left. I get back on the metro and watch an enterprising young hawker cause a sensation among some housewives with his rubbery toy men that climb down the window.

The fine weather is fleeting. A few days later, the road to the airport is lined with abandoned cars gathering thick layers of snow. 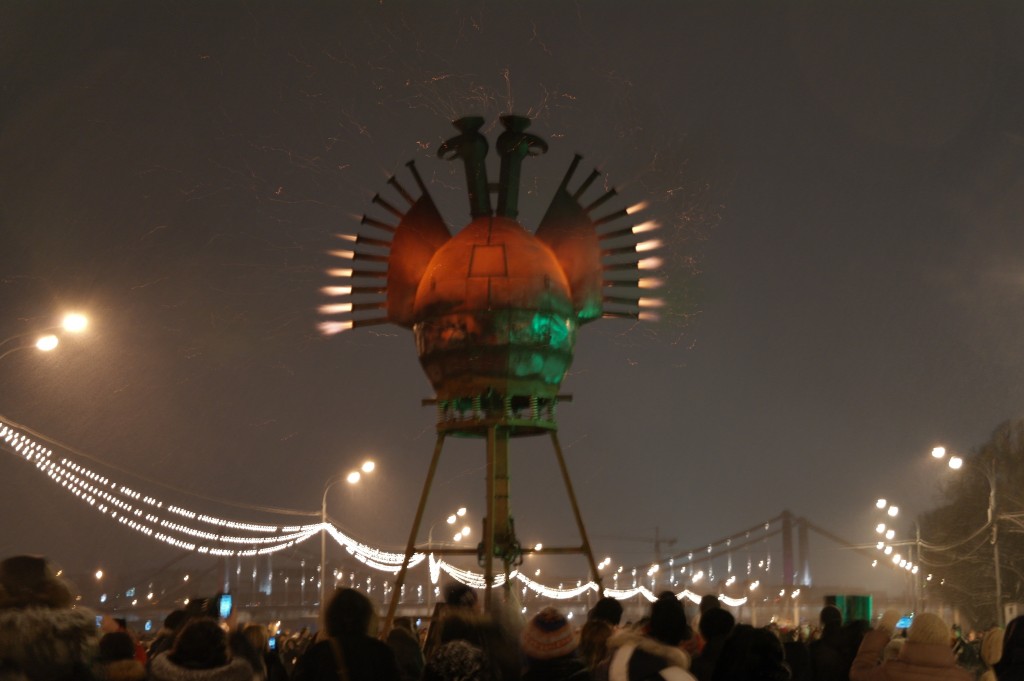 This is not a confession. This is not a story or a parable, a manifesto or a warning, a love letter or a fantasy, self-help or recruitment drive. If it mattered when I first tried a cigarette, I coul… Read article

Eyes to the ground. Each step brings a new texture, mostly curious, sometimes treacherous. It may be the relentless subzero temperatures striving to shear layers of stone from the bedrock of paving sl… Read article