In Moscow again, treading the sweating asphalt in the unforgiving sun. Rivers of cars flow round the Kremlin, girdling the walls in a cloud of exhaust fumes which seeps into the underpasses. This is no place to come on holiday. The best thing you can do is head for the park. 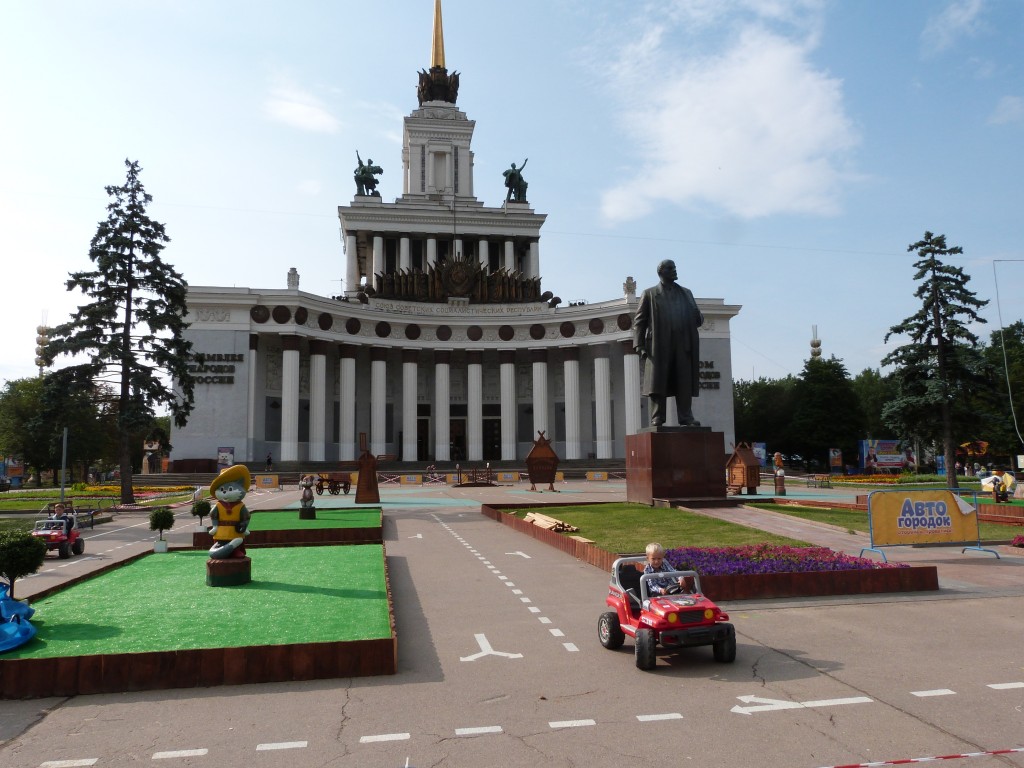 Behind the New Tretyakov Gallery, they’re smartening up the Muzeon, or ‘arts park’. Putting in walkways, rolling out soil, relaying lawns. It began as a graveyard for the obsolete monuments of the Soviet Union. ‘Iron Felix’ was one of the first to be rounded up and brought here — Felix Dzerzhinsky, infamous chief of Lenin’s secret police — having been toppled from his plinth outside the KGB headquarters, Saddam-style, by an angry mob in August 1991. They daubed ‘antichrist’, ‘bloody executioner’ and ‘shit in a leather coat’ on the statue before dragging it down with the aid of an iron noose.

He’s been here ever since. Last year the Moscow authorities declared the statue an ‘object of cultural heritage’ and slated it for restoration. The Muzeon, on the other hand, wanted to keep the graffiti because it was ‘just as historic as the sculpture itself’. Looking at the statue, it’s hard to tell whether a decision’s been taken yet. I can make out some words around the base but they seem faded and partly effaced, as though a half-hearted, compromised clean-up operation has taken place.

Iron Felix has done well to end up here, put out to graze in a leafy park with some of his old chums. Over there is Lenin, or a bust of him, next to one of Marx, and there’s Sverdlov, the Bolshevik activist who helped organise the murder of the Tsar and his family, standing proudly next to a noseless Stalin in pink marble. Now their retirement home is getting wooden decking. Perhaps there will be an audio guide. My phone tells me that I can connect to the free ‘Muzeon-Stalin’ wi-fi, if I want to.

They were never intended to be forgotten entirely. What may have begun as a dumping ground ‘out back’ of the gallery became a designated open-air sculpture park only a year later, in 1992. Many other, post-Soviet sculptures have joined them since, including memorials to the victims of oppression: screaming heads in wire cages, erected in uneasy juxtaposition with their persecutors. The question of how Russians feel about the Communist past, and how they want to remember it, is vexed in the extreme. A few years ago, Stalin came third in a televised poll to name the greatest Russian. The authorities are widely believed to have intervened to stop him winning.

There’s also the question of practicality. There’s so much monumental art left over from the USSR, much of it built into the fabric of public spaces and buildings, that it would be very difficult to get rid of, even if you wanted to. They’re heavy, these Soviet blocks. For a regime so adept at erasing history its monuments are inconveniently tenacious.

At the All-Russia Exhibition Centre, toddlers are driving extremely slow go-karts around a monolithic statue of Lenin. This park-cum-trade-fair to the north of the city centre once showed off the glorious produce of the various Soviet republics, and their agricultural and technological prowess, in what was intended as a permanent festival of propaganda. The carvings on the Ukrainian pavilion, finished in 1939, boast of plenty when that country had been forcibly starved by collectivisation only a few years earlier. The colossal Stalinist pavilions that once housed the exhibits, and the fountain-lined avenue that connects them, now host a chaotic array of amusement sideshows, tawdry shops and inadvisable kebab joints. It’s a vast, sad place.

The House of the Peoples of Russia, the huge marble wedding cake at the centre of the park, is now a warren of miscellaneous tat where you can buy lava lamps, bongs, cowboy hats and samurai swords. In the Space Pavilion, a giant portrait of Yuri Gagarin looks down on a few babushki browsing among the seed racks and pot plants of a mostly deserted garden centre. Outside the Atomic Energy Pavilion, which in its heyday housed a working nuclear pile complete with glowing underwater rods, sits a woolly mammoth cuddly toy, advertising an ice age exhibition inside. An inflatable crocodile farm flanks the Culture Pavilion, where you can buy a knock-off watch or a Putin doll, while the Georgia Pavilion, I am told by the gap-toothed hustler at the door, contains something for everyone: with a single ticket you can visit ‘museums’ to alcoholism (I think he meant alcohol), torture (medieval, rather than KGB, I think), ‘Soviet times’ and some kind of shark experience that probably doesn’t involve sharks.

It’s hard to imagine anyone enjoying a place of such inhuman scale as this. These marble follies, built to circumvent thought and intimidate, are Stalinism’s crumbling tombs, and it seems fitting that hawkers flogging cheap consumer goods have squatted there as though to mock them. The late afternoon rain arrives suddenly, violently, sizzling off the tarmac in hot, fat drops.

But in Gorky Park, people are meeting each other, walking along, chatting, lying on the grass, riding bikes, reading, rowing boats, rollerskating, playing beach volleyball, winning and losing at chess, eating sandwiches, drinking beer, walking dogs, doing yoga, holding hands, dabbling their feet in the musical fountain, kissing and doing absolutely nothing. Everything is amusing. Hipsters playing table tennis. Giggling girls on a photo shoot, draping themselves over-dramatically along a park bench. Kids dancing to their iPods on a stage rigged up with speakers. A sunburnt man teetering on the lake’s edge, trying to hand a pint to his mate in a boat. The park’s regeneration, a joint public and private initiative, is the best thing that has happened to Moscow in recent years. The only oversized objects here are some enormous cushions on the lawn. There’s a slapstick, work-in-progress feel; even the task of tiptoeing quickly over wet bitumen is quite fun here.

Opened in 1928 by the early Bolsheviks, the park was originally named the Culture Factory, and then the Gorky Park of Culture and Rest, after the writer. Significantly, it was Melnikov and El Lissitzky who designed and shaped it, two of the greatest figures of the post-revolutionary avant-garde, an age of bold, utopian creativity that flourished for a decade before the advent of Stalinism. The park declined sharply in the post-Soviet era, becoming the resort of drunken soldiers ranting among the rickety fairground rides. But now it is rediscovering its original purpose, as a place of relaxation and cultural edification. The Garage Centre for Contemporary Culture, promising lecture series and world-class exhibitions, will open its new home in the park next year in a former Soviet restaurant currently being converted by Rem Koolhaas. New Russian-language editions of Susan Sontag, John Berger and Walter Benjamin, commissioned at the request of Muscovites, are already on sale in the bookshop.

If it is the best park in the world, which it may be, it’s partly because the people here need it so much. It is fun, irreverent, sociable, playful, green and free — everything that Moscow currently isn’t. If that is to change — and it might, given time — then the revolution will have started here: in the park.

Reading Between the Lines

My latest list is a to-do list. I used bullet points (to add a special air of organisation) and ranked each item in order of importance (ditto). It is a short list and I have done none of the things o… Read article

Turning left on Driftwood, he saw the sea and then he saw the trail. It wasn't quite a bloody trail of violence, the kind you see after a bar brawl when a battered nose spots a shameful line to the vi… Read article